skip to main | skip to sidebar

This is hilrarious, amazing, and incredible. I want to shake the hands of the people behind this work of art.
Posted by Angela at 10:49 PM 1 comment:

I strongly recommend reading this great article about Anne Graham Lotz (Billy's daughter). As a fellow female who believes she is called to preach, I cannot tell you how much this article blessed, encouraged, and strengthened me in my faith. I would really love to hear her preach sometime. God truly does use the foolish things of this world to confound the wise.
Posted by Angela at 1:23 PM 1 comment: 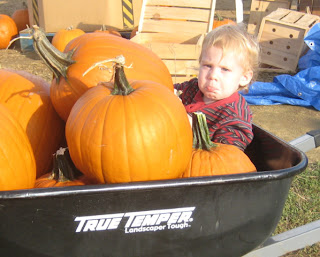 Around this time of year we as parents like to dress up our kids in costumes that they end up hating and wanting to take off after only 10 minutes. We take them apple picking when they don't even really like apples, and in fact, would rather eat cake. We bring them along on adventurous trips to pumpkin patches. We take a bunch of goofy photos of them amidst fields of brilliant, orange globes, when it's obvious that they're not even sure what a pumpkin really is and that expression clearly shows on their faces. We assume they're going to have a great time. We think that they're going to love it. But really, they try to love it because we've told them they will. We've built up the Pumpkin Patch. We've sold it to them like it's Disney World. When, really, they're just miserable. They're crying. They're tired. They're hungry. They're dirty. We somehow know that by taking them for a ride on a Cow Train, a hay ride, a smelly trip to a petting zoo, and then to pick out a pumpkin (soon to be tossed in the trash, very haphazardly decorated and/or carved, in just a few short weeks) that we've crossed the inevitable, imminent melt-down threshold. We know ahead of time that we will probably end up leaving with someone...or two...or three of them crying. And yet we forge ahead. We plod along. We march forward and stubbornly do it anyway.

What do my children know or even care about harvest except what I've told them and built up for them? About apples? About...pumpkins? We buy all of our "harvested" produce from Ingles. Do they even give a rip?

At the end of days like these, this conversation can always be overheard taking place in the family van on the way home:

"Guys, did you have fun today?"

"Because we didn't get to do..." (Fill in the blank with whatever ONE thing we did NOT let them do and that is the thing they will focus on for the rest of the evening).

"But didn't we have fun doing...?" (Fill in the blank with ALL the numerous things we DID do for them and with them throughout the day).

I think they really did have a good time. I did, even though there were moments when I found myself wandering through a corn maze, questioning my sanity. I sometimes think, though, that stuff like this is really more for the adults, and we get to use our kids as an excuse to act like goof balls. That's what we did this weekend. And we'll probably do it again next year. I guess it beats staying inside and watching television!

For more proof of our pumpkin fun click here. My sister-in-law, Kim, has some more great ones here.
Posted by Angela at 12:00 AM 10 comments:

Whew. I've been tagged by my lovely friend Erin. Which I am ever so grateful for, after the last Debbie Downer of a post I last put up. Hallelujah. Here are the rules I've been given:

*Link to the person that tagged you and post the rules on your blog.
*Share seven random and/or weird facts about yourself.
*Tag seven other people at the end of your post and link to their blogs.
*Let each person know they've been tagged by leaving a comment on their blog.

Wow. That sounds like a lot of hard work. More work than I've done in the past two weeks. But I'm gonna go ahead and give it the ol' college try. Here we go.

1. I love beets. I mean. I think they're absolutely perfect and wonderful in every way. I think their sweet, earthy, juicy flavor is probably close to what Heaven would taste like, if it were a root vegetable. Like, I could eat them every day if they weren't such a pain to prepare and didn't stain your fingers blood red for days afterwards, prompting curious questions from friends and family. Actually, I just found some the other day already prepared and prepackaged in the produce section at Ingles. This could become a dangerous habit of mine.

2. I love stand-up comedy. I laugh and laugh.

3. I visited the actual movie set of "The Neverending Story" in Munich, Germany. You can ride on Falcor's back, but they only chose 3 little twerps from my third grade class to do so. I wasn't one of them. I am not bitter about that at all.

4. I have an A.B. in Political Science and I minored in Spanish at UGA. Translation: I am a Stay At Home Mom. Go Dawgs.

5. My dad was born in Hamrun, Malta. Yes, it's a real place, and no, that's not where the malt was invented.

6. I also love sci-fi. I didn't realize this love until after I got married to a sci-fi nerd and had my first child. I didn't get hooked on Oprah or soap operas as a newbie stay at home mom. No. Every day, I climbed aboard the U.S.S. Enterprise with Captain Jean-Luc Picard and the rest of the crew and traveled the galaxy while watching reruns of "Star Trek: The Next Generation." Space. The final frontier. One of the best shows ever made. And, yes, I own every episode on DVD. Jealous?

7. Speaking of Star Trek, my maiden name is Borg. Resistance is futile.

Calling a Spade a Spade

I just read an amazing article by Kay Warren (you know, the wife of that dude who wrote that book???) about human nature and our capacity for evil. I found it refreshingly honest, freeing, and a bit frightening all at the same time. I can't say I was surprised by anything she wrote. I'm well aware of our propensity to do wrong and have been ever since I became a Christian over 12 years ago. However, I think there's something inherent in our culture that allows us to pet, coddle, and justify our sinfulness. We're not that bad. We categorize "wrong" things together with swear words and credit card debt. I think that somewhere along the way, it's easy to lose sight of how broken we...you and me...really are. Even those we put up on a pedestal. It's easy to do. It's tempting to want to believe in humanity. To put your hope in a person. In a vision. Believe that we can change. Believe that, deep down, we really are good people. That I can make myself whomever or whatever I want to be. Believe that you hold the key to your destiny and all that rot. But we simply don't. We never have, and never will. From birth, we are broken. And will be until the day we die.

I think the message of this article is a bit hard to swallow. It's not a lighthearted read. But it ministered to me nonetheless.The truth is, I don't think we in America think of ourselves as "evil." We're not burning down villages or committing genocide or anything like that. We're good church-going folk, we pay our taxes, we provide for our families. But I think of the utter selfishness that plagues us, and it frightens me. I see it even within myself. We are willing to go to great lengths to have our "rights," even, and especially, at the expense of everything and everyone else around us. As long as our needs our met, right?

I find myself coming face to face with my own selfishness as I try desperately to mother these 4 precious gifts that God has given me. They remind me, every day, of how absolutely selfish, shallow, and self-centered I truly am. Parenthood will do that to you. Thank God we have a Savior, right?

Anyway, enjoy the article. I really didn't mean for this to turn into a rant. Sheesh.
Posted by Angela at 1:44 PM 4 comments:

The problem with having so many small children is that any time any one of them gets sick, it's pretty much guaranteed that every one of them will eventually get it. At least this one's old enough to make it to the toilet. Count your many blessings, right?
Posted by Angela at 7:46 AM 7 comments:

I keep coming across some very cool quotes by G.K. Chesterton. I've never read any of his stuff, but the quotes I keep reading are making me want to go out and find something he's written. I just read this, and in light of all the political debates and campaigning and whatnot, I found it to be quite accurate and humorous.

Anybody ever read any of his stuff? If so, any recommendations?
Posted by Angela at 12:14 PM 5 comments:

Just when you think it's safe to put the spew bucket away...

My apologies to those with weak stomachs. The graphic really is much nicer than the reality.
Posted by Angela at 8:55 AM 2 comments:

Do you know what the surfing phrase "Hang Ten" really means? I totally didn't know until today. Hanging ten is a surfing maneuver where the surfer positions his or herself on the front of the surfboard so that all ten toes hang off the nose of the board. Hence the name: Hang Ten. Pretty cool. Or totally crazy. I'm not sure which one!

I may be completely putting myself out there as the dork of the century by admitting to not knowing this, and for the fact that I learned it while watching this awesome show. But hey, what can I say. I live on the edge. I Hang Ten. On LIFE.

The lyrics to this song have been playing through my head this morning. It's funny how you can listen to a song, or read something, or watch a scene from your favorite movie over and over again, and the full weight of its meaning doesn't impact you for some time. The combination of time and a similar set of experiences seem to open up a window in your mind, letting you in on what the author was feeling at the time he or she wrote it. All that to say, I seem to have a deeper appreciation for the lyrics to this great song these days.

Complication's my claim to fame
And I can’t believe there’s another
Constantly just another
I can’t avoid what I can’t control
And I’m losing ground
Still I can’t stand down
And I know, yeah I know, yeah

Books On My End Table